What is Geothermal District Heating Technologies and Uses systems in Europe About GeoDH.eu

What is Geothermal District Heating?

Geothermal District Heating (GeoDH) is the use of geothermal energy (i.e. the energy stored in form of heat below the earth’s surface) to heat individual and commercial buildings, as well as for industry, through a distribution network.

The first regions to install GeoDH, were those with the best hydrothermal potential, however with new technologies and systems, there is an ever increasing batch of regions that are developing geothermal technology for heating & cooling. Systems can be small (from 0.5 to 2 MWth), and larger with capacity of 50 MWth. There are some new District heating schemes that utilise shallow geothermal resources, assisted by large heat pumps.

The ‘hot’ GeoDH markets in Europe are in France (Paris, and renewed activity in the Aquitaine basin), Germany (Munich) and Hungary, but it is important to always underline that geothermal DH systems can be installed in all European countries. In recent times, there have been new entrants to the market:  The Netherlands, Spain (Madrid), UK (Newcastle) etc. By 2020, nearly all states in Europe will have GeoDH

What are the main technologies and uses?

Many GeoDH systems (such as in the Paris Basin) are based on a dependable sedimentary resource environment, and on the doublet concept of heat extraction. Modern doublet designs include two wells drilled in deviation from a single drilling pad. Bottom hole spacing’s are designed to secure a minimum twenty year span, before cooling of the production well occurs. Well depths (deviated) of 2,000m to 3,500m are not uncommon; and these are often located in sensitive, densely populated urban environments, therefore requiring heavy duty, silent rigs (up to 350 tons hook loads, diesel electric drive). 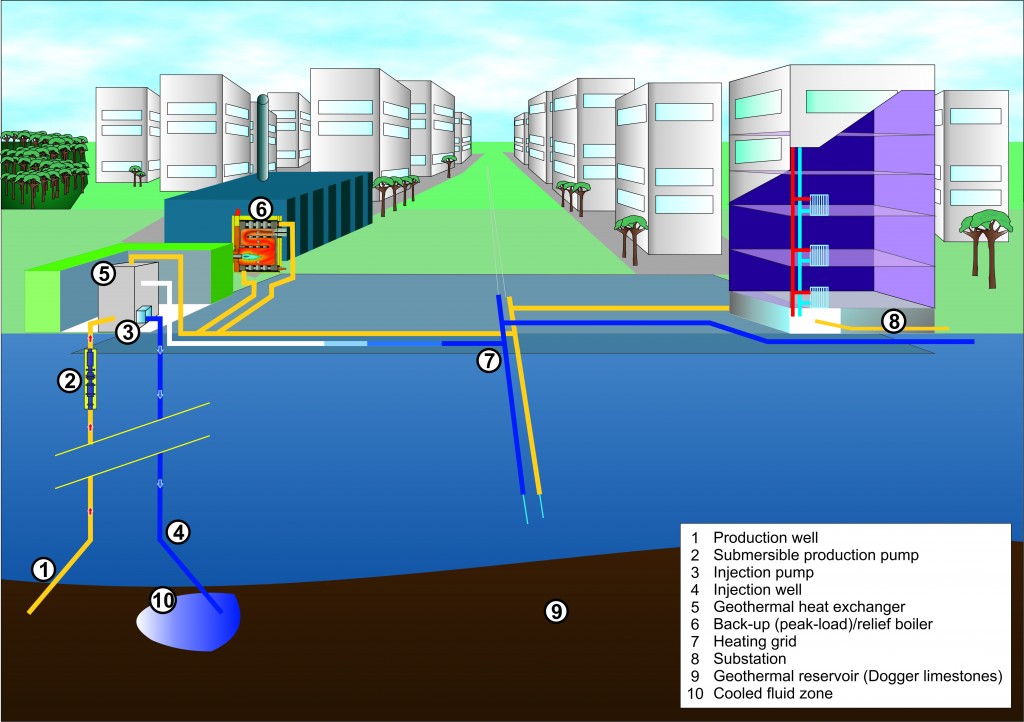 As is the case in Milan, we are also seeing the installation for systems with lower temperature assisted by heat pumps. In several instances (Denmark, Germany, Iceland) absorption heat pumps, often associated with geothermal Combined Heat & Power plants (CHP), have been successfully installed and operated.

Additionally, the installation of GeoDH systems becomes more economic close to areas with higher urban density, as both resources and demand need to be geographically matched. One considerable challenge in the current economic crisis concerns the financing and the development of new heat grid infrastructures. Retrofitting is an alternative for developing the GeoDH market. Oradea, in Western Romania, is an example of the insertion of a geothermal heating system into the existing city: a coal fired/back pressure system, combined heat and power (CHP) network, typical of previous Central/Eastern Europe district heating practice.

Geothermal district cooling is actually poorly developed in Europe, with merely 30 MWth installed cold power. This development issue should be challenged by geothermal operators (and users), as it could provide additional summer loads to GeoDH systems. In the Paris Basin, for instance, absorption chillers can be placed in grid substations and the primary hot fluid supplied by the geothermal heat plant. The chilled water can be piped to consumers via the same flow circuit used for heating.

GeoDH.eu is an information hub about Geothermal District Heating in Europe. It is managed by the European Geothermal Energy Council (EGEC)

The GeoDH project aimed to overcome the non-technical barriers to the development of Geothermal District heating, specifically by:

Many of the results and resources available on this website are a result of the GeoDH project.

The Project Partners were:

The partners corner can be found here.