Geothermal District Heating (GeoDH) is the use of geothermal energy to provide heat to buildings and industry through a distribution network.

On this website you can find out more about Geothermal District Heating in Europe: how it works, the European market and its future development, regulation, financing, and Potential

There are over 5,000 district heating systems in Europe, including more than 240 Geothermal District Heating systems. The first regions to install GeoDH were those with the best hydrothermal potential, however with new technologies and systems, an increasing number of regions are developing geothermal DH. Systems can be small (from 0.5 to 2 MWth), and larger, with capacity of 50 MWth. Some new District heating schemes that utilise shallow geothermal resources are assisted by large heat pumps. 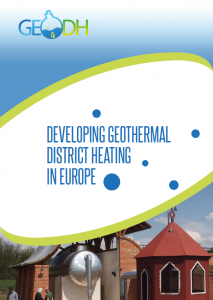 Download the Guide to Developing Geothermal District Heating In Europe

Many GeoDH systems are based on favourable geothermal conditions with high enthalpy resources, and on the doublet concept of heat extraction. Modern doublet designs include two wells drilled in deviation from a single drilling pad: a production and an injection well. Geothermal fluid production is usually sustained by production pumps.

Installing GeoDH systems in areas of high urban density improves project economics, as both resources and demand need to be geographically matched. One considerable challenge in the current economic crisis concerns the financing and the development of new heat grid infrastructures. Retrofitting existing district heating systems is an alternative for developing the GeoDH market.

The main benefits of geothermal heating and cooling are provision of local, baseload and flexible renewable energy, diversification of the energy mix, and protection against volatile and rising fossil fuels prices. Using geothermal resources can provide economic development opportunities for countries in the form of taxes, royalties, technology export, and jobs.

The crucial challenge is to promote geothermal district heating in Europe and to facilitate its penetration to the market. The more than 240 geothermal District Heating plants in Europe have a total installed capacity of more than 4.3 GWth and a production of some 12900 GWh.

The European GeoDH market can be divided into three segments:

Mature markets. Several European countries have a long tradition in geothermal DH and set ambitious 2020 targets for geothermal DH: Germany, France, Hungary and Italy. In order to reach these targets, simplification of procedures and more financing is required.

Transitional markets. There are several Eastern and Central European countries, such as Poland, Slovakia, and Romania with geothermal DH systems installed. However, the potential is much larger.

Juvenile markets. A third group of EU countries includes those Member States currently developing their first geothermal DH systems, such as the Netherlands, UK, Ireland, and Denmark. There is no tradition of GeoDH so there the market conditions for its development need to be established. In other Eastern and Central European countries, including Bulgaria, the Czech Republic, and Slovenia, there is a need to convince decision makers and to adopt the right regulatory framework but also to establish the market conditions for a development of the GeoDH market.

The potential of deep geothermal is significant; however geothermal DH technology is at present poorly developed. Three key areas have been identified as important to improve this situation.

In addition, it is important that a level playing field is established by liberalising the gas price and taxing GHG emissions in the heat sector appropriately.

Regulatory Recommendations
A geothermal DH project is based on the estimated geothermal heat that can be generated from the reservoir and an analysis of the heat demand. The estimation of costs and revenue streams are specific to each individual project.

In a Geothermal District Heating project, both risk and capital expenditure are concentrated in the early phases of a project; the existence and quality of the geothermal resource can only be proven after the initial drilling has been completed. As the project progresses, both the risk and investment curves shallow, although the long term risk of the resource depleting over time remains.

The specific risk profile and concentrated need for capital, compounded by a general lack of awareness and understanding, are challenges for financing GeoDH projects. The estimations of cost and resource will improve with increased development of GeoDH, but projects will always involve some risks. Because of this, specific financial tools are required.

Initial exploration yields important data regarding geothermal potential before drilling; however, a ‘geological risk’ still exists and can threaten the bankability of a project. The geological risk can be that adequate resources are not found (short term) or that the resource declines naturally over time (long term). The geological risk is a common issue all over Europe, yet only certain countries (France, Germany, Iceland, The Netherlands and Switzerland) have insurance schemes.

Solid project planning and risk management are essential elements of a developing project, and need to be implemented at the earliest stage.

Risk management does not necessarily imply the elimination of risks, but rather their systematic management and mitigation. Some risks may be passed on to third parties, for example through insurance (public or private) or grants (repayable).

The financial performance of the system depends on the thermal load density, or the heat demand per unit area. Economic benefits are achieved by combining heating and cooling, as the resulting load factor is higher than for heating alone, and unit energy cost lower.

Generating costs and selling prices are usually around 60 €/MWh thermal, within a range of 20 to 80 €/MWh thermal. This depends on local geothermal settings (high/low heat flows, shallow/deep seated sources), socio-economic conditions and pricing policies (kWht or m3 of hot water).

More than 25% of the EU population lives in areas directly suitable for Geothermal District Heating. There is a large potential, with GeoDH systems in operation in 22 European countries. Geothermal generation has its roots in Europe.

From the map we can note that:

According to Eurostat, about one third of the EU’s total crude oil (34.5%) and natural gas (31.5%) imports in 2010 originated from Russia. Of this, 75% of the gas is used for heating (2/3 in households and 1/3 in the industry). Geothermal DH technology has the potential to replace a significant part of that fuel.