In Europe, there are over 5,000 district heating systems installed in 2012 (including 212 geoDH systems), and the market share of district heat is about 10% of the heating market. There are already several Eastern and Central European countries (such as Hungary, Poland, Slovakia, Slovenia, Czech Republic, and Romania) with geothermal DH systems installed. However, as suggested in several NREAPs (Hungary, Poland, Slovakia) the potential is much larger. The challenge now is to remove administrative and financial barriers in order to facilitate the penetration of geoDH. In the other Eastern and Central Europe countries (Bulgaria, Czech Republic, Slovenia) there is both the need to convince decision makers and to adopt the right regulatory framework but also to establish the market conditions for a development of the GeoDH market.

Moreover, also several Western European countries have 2020 targets for geothermal DH of which Germany, France and Italy are the most ambitious. In order to reach these targets, simplification of procedures is needed and more financing required.

Finally, a third group of EU countries includes those Member States currently developing their first geothermal DH systems, such as the Netherlands, UK, Ireland and Denmark. For this third group of countries, there is no tradition of GeoDH so there is a need to establish the market conditions (regulatory, financial, etc.) for its development.

The GeoDH consortium will be working on these 3 different groups of countries (with juvenile, in transition and mature markets) with 14 countries covered in total, in order after the project to replicate activities in all EU-27 member states.

Today geothermal DH technology is poorly developed although the potential of deep geothermal is significant. Subsequently, the specific objectives of GeoDH are to:

GeoDH will result in increased awareness on the potential applications and benefits of DH&C with geothermal energy, in a set of recommendations for removing barriers and improving regulatory frameworks, in a better understanding of related technologies, costs and financing, as well as in a transfer of best practices to national and local authorities.

in the GeoDH project (a total of 14 countries are covered) 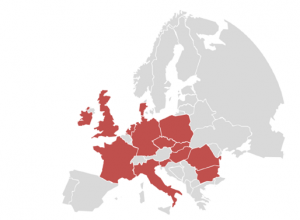 The project the consortium has established a genuine contact with stakeholders who are crucial for a successful implementation of the projects, namely:
A. Policy and decision makers of national authorities to adopt the right legislative framework;
B. Decision makers from municipal and local authorities and energy authorities to have a better regulatory framework and simplify the procedures at local level;
C. Banks, potential investors and other market players to stimulate investment in the sector;
These stakeholders will be associated with the project in order find solutions together for removing the barriers mentioned in the foregoing sections.
Furthermore, a second group of stakeholders will be involved as they will benefit from better market conditions and are interested in tools provided by the project:
A. National and local suppliers, designers and installers of district heating and cooling systems (namely engineers, geologists, technicians and utilities) and small and medium-sized enterprises (SMEs);
B. District heating operators and DH associations;
C. Owners and tenants of large buildings;
D. Educational and training institutions (universities, training centers)
They will be active in an Advisory committee and during the dissemination phase in order to reach as many stakeholders as possible across the EU.